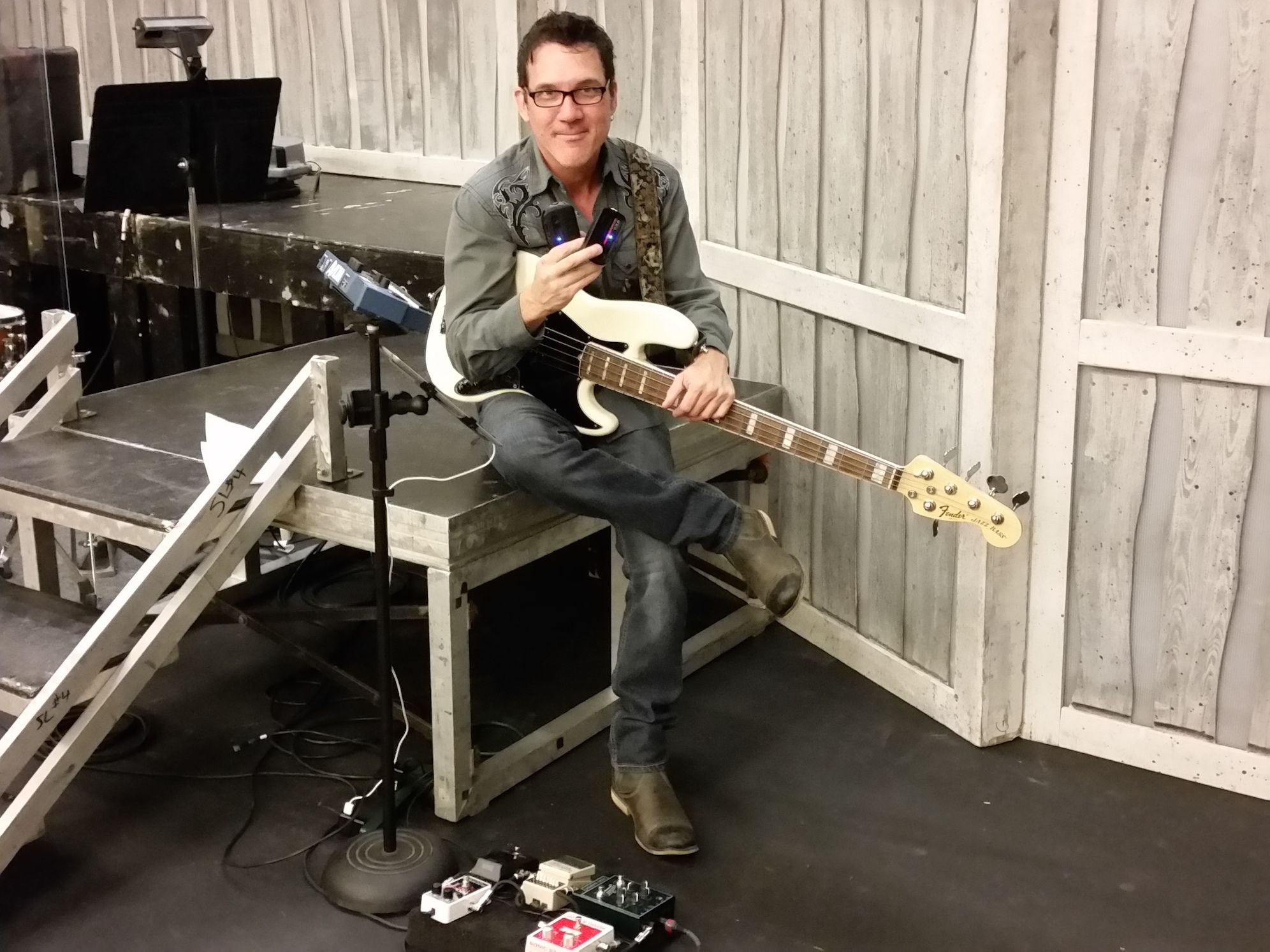 Rodeo Allen has been playing bass and performing in and out of Nashville for a little over 15 years. He also finds time to write whenever an idea/concept guy is needed. He also has a deep passion for development and consulting because “I want everyone to be successful!”

By the way, the name Rodeo comes from the few years he was a pro bullrider!

The PRA WiC wireless sounds great. I tested it direct into a console, as well as just using headphones. And since tone is king, with no low cut or a high filters that alter the tone, the sound is true. I haven’t had any trouble with the PRA Wireless and thats a big deal. I’ve used it at fairs, theatres, festivals, bars, and rehearsals… it works perfectly. Easy to transport, use, set up, and all in something smaller than your phone!

We interviewed Rodeo, and here’s what he had to say:

What got you into music and what was the first concert you attended?

Oddly enough, I was a TV fanatic when I was younger. Mostly since you couldn’t ‘see’ Radio! The TV broke, and we never got a new one till I was a senior in high school. Music became a strong passion for me, and I took my first paid road gig at 16.

My Mom took me to an outdoor concert which I believe was the Eagles. I was really young then, but my first legit one was ACDC, For Those About to Rock.

The visual of Live performances, the energy, all happening in the moment. In real-time. Had me hooked for Life.

Tell us about the first gig you ever played?

I’ve forgotten more gigs then I remember! Since I was so young at the time, bars wouldn’t allow me to be inside during breaks.  So I’d sit in the truck or van, or the kitchen of the venue. It did help me become an observer of people, had to entertain myself somehow, so people watching became a way to pass the time. The bands were top-40 stuff back then, and playing guitar back then. Its been a long and winding road since then!

I have quite a few that make me proud to have performed at, but the one that stands out is back when 9/11 happened. I was playing music at my church here in Nashville for Wed services. 9/11 happened on a Tuesday, so Wednesday was cancelled till Thursday. I remember it pretty clearly, it seems! The church was music based services, sat maybe 1800 people, big stage, beautiful place! Stage lights were dim, big candelabras were placed onstage and lit. Very moody. Every seat was taken and it was standing room only. Along the walls as well as up in the balconies. It was a powerfully moving experience, to play the service for so many people seeking answers to what had happened. I felt blessed to a part of so many Lives that day.

What are you listening to now?

Caught me at a time I’m doing musical direction for an 80’s production show. I’ve been listening to everything 80’s! Movies, soundtracks, TV shows, commercials, as well as the music from that era, of course. My hat;s off to those who are not with us anymore…, Bowie, Prince, Whitney Houston….

What am I listening to….

I believe the last tune I listened to was “Holiday Road” from National Lampoons Family Vacation. That song will make ya smile. Try it!

What is your deserted island album?

As a realist, I wouldn’t have anything to play the music on. So I would hope my acoustic guitar survived, and maybe a case of strings would wash ashore, too.

And if you were stuck on the desert island and could only have one type of food and drink (besides water) what would that be?

Having things I could make into fishing gear, I can catch my food. LOVE seafood! If I could blend fruit together for a smoothie of some sort, That would work. Though I would be searching for that few bottle of wine to float ashore!

Who is one person you would like to meet (alive or dead, musician or not)?

Wyatt Earp. If you’ve ever read or looked into his Life story, its amazing how it all lined up. Fate or destiny does exist, It’s like his life was choreographed at every turn. Did you know he was the expert on all the old western movies, plus a mentor to John Wayne in all his movies? Amazing Life and story.

Who would you cast to play you in a movie?

I’d have to say Paul Rudd. He has that awkward appeal that I do towards Life.

Besides music, what are you into?

I am an idea or concept guy for songwriters, as well as doing development for artists and bands. I get off on helping people live their dreams. Helping them to grow in this business. I have a bunch of side projects that aren’t musical, but still within the industry to an extent. Anything creative, new, different, and fun….my mind drifts into breathing it Life!

Oh, you said ‘outside of music’… Hmmm…

I am working on a book of my career, as a teaching tool and humorous stories. As well as a coffee table book of photos from the road. You know, the weird stuff you see out there…it’ll make you smile.

And interview is not an interview without talking about gear. So let’s talk gear. Must have, best for studio, a must for tour?

Tone is key. I fight with that all the time as a bass player. Spend the money on a good bass, do your research to find the one that works for you. It’ll make your Life music easier in the realm of achieving good tone. My pedal board consists of…Tuner, a graphic EQ for overtones in the different rooms, My PRA wireless system, sonic maximize, and the flavor box of tone, Aquilar Tone Hammer. All this is brought together with a compressor to even it all out. These are mainly to have options on any tonal problems I may have, or guitar players eating my low end. My fun pedals are an envelope filter, and a pitch fork for uptuning/detuning, octave, and a chorus all in one. I use the same stuff in the studio. Though my Fender Jazz and Marco PJ basses sound great by themselves, sometimes a bit of addition ‘color’ to the tone is needed.

Speaking of tour… any previous tour stories you want to share?

I’m not much of a people person, it’s the social anxiety, I guess. But I live with it. Each outing or tour, there are so many people to meet. So many stories they have to tell. I live vicariously through each one of you! Life is a finite commodity, meant to be spent wisely.

Hug it out, all lives matter.

Check out these videos from Carlos Alomar