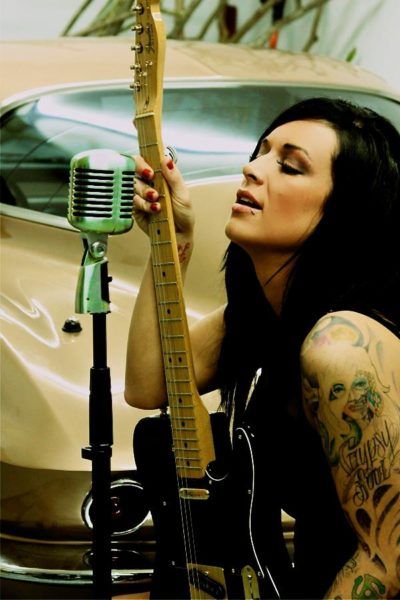 Jesse Roach’s breakout success was her debut on the famous TV show American Idol, but her warm and natural personality is what stood out to me. Her old school, country roots (born in Georgia, lives in Texas) are very evident in her writing and performances.

Jesse Roach has been described in the press as talented, sexy, passionate and completely alluring. Her music has been called real, unaffected and simply magical. A true natural in her singing and writing, reflecting the deep South Texas blues heritage absorbed as a child, Jesse has introduced a modern sensibility to the old passion. An atmosphere of back porch concerts under the low hanging Spanish moss in the old Live Oaks, is evident in the raw tonalities of her voice and the stories she tells. Driven by a need to perform and express herself, Jesse found a guitar, put her stories to music and began singing to whoever was around. Thus, after a chance meeting with veteran guitarist/songwriter/producer Ken Reynolds at one of her shows in Houston, in less than a year, Jesse’s fame and recognition has reached a point to where she is one of the best known artists in Houston.

Writing and recording in a collaboration with Ken, Doug Deforest and Ron Geslin, Jesse and her ‘team’ are on the way and ready for anything. Looks, talent, style and bravado come together to form the very core of this beautiful young lady!

I use my PRA WiC wireless guitar system every gig. I love being able to walk around and party on stage, so having a good wireless system is awesome for me.

Jesse Roach’s breakout success was her debut on the famous TV show American Idol, but her warm and natural personality is what stood out to me. Her old school, country roots (born in Georgia, lives in Texas) are very evident in her writing and performances.

Can you tell us a little bit about yourself?

I was born in Georgia, but we moved every couple of years because my Dad was military. I’ve lived in 6 different states.  When I’m not playing music, you can find me at the beach or the lake or the deer lease!

What got you into music in the first place?

I’ve always liked singing; I used to sing in church groups, stuff like that, but I taught myself how to play guitar about 9 years ago and finally got serious about it.

What was the first concert you attended?

I had seen small shows before, but my first real concert was in 2002. Believe it or not, I saw Def Leppard in a Walmart parking lot, for free.

What is your favorite guitar? Do you prefer acoustic or Electric?

Acoustic. My favorite is my Martin for sure… I love that thing. I’ll most likely play it ‘til it dies.

What is one piece of gear you never leave home without?

My Capo… People are always asking me to play randomly wherever I go, and I use a capo for a lot of songs, so I always make sure to have one on me. I keep one in my purse, one in my trunk, one anywhere I might need it. I also use my PRA WiC wireless guitar system every gig. I love being able to walk around and party on stage, so having a good wireless system is awesome for me.

How would you describe your style? Influences?

I hate to sound cliché, but I’ve always loved Hank Jr. My roots are old school country, but recently I’ve been getting more into blues… I write my own music… I like to tell stories in my songs. They might apply to my own life, or it might be a story someone else told me that stuck with me and I wanna share it. Normally, I just sit at home and make myself write words down to get the creative process going.

You really made a name for yourself by being on American Idol. Can you tell us a little about that experience?

It was really hard, and the schedule is pretty rough. There are so many more rounds than what you see on TV. Once you’re in LA, there’s a new round every day, so there’s not very much time to prepare.  You’re up at 5 am, but you probably didn’t get to bed until about 3 am. While you are already running on very low sleep, your whole day is non-stop singing, exercises, and practicing. Even your meals are on a schedule… Not really any down time, except for when you are waiting for your turn for whatever is next. Honestly, I think I spent the majority of the time waiting. I used that time to nap if I could. Besides all of the stressful parts of being on the show, I learned a lot. They have really great coaches to help you out.

What was the hardest thing about that audition?

Remembering lyrics to the songs was hard, because you have to pick from a set list of songs that are okay for TV. They aren’t the songs you know and are used to singing, and you don’t get a lot of time to learn them. I was constantly worried about it, because it’s a pretty big deal to the judges. I mean if you’ve ever seen it on TV, you know how it goes when someone messes up during their performance. It’s definitely not good.

What was the most valuable thing you took away from being on American Idol?

You are surrounded by so many really good musicians the whole time, so you realize how much other talent is out there.  I learned how far I can push myself in a competitive environment.

What was your next move once you were done with the show?

I had been playing gigs before I went on American Idol, but when I got back, I started getting more requests and for bigger venues, for example The House of Blues. The recognition opened a lot of doors for me. It was pretty cool for me to come back and immediately feel all this love. Recently, I’ve been writing some new songs. I’m going for a different vibe than my normal stuff, a little more bluesy-soul-country… I do play music for living, but I have another job as well, so it’s been pretty busy, between work and playing shows.

What kinds of shows are you playing?

I play in small bars, mostly in Texas, but like I said I sometimes play at bigger venues. On July 8th, I am doing a song swap [two artists alternate songs on stage during the performance] with another artist at Typhoon Texas water park.

Do you have a favorite gig story you’d wanna share?

I am a HUGE daddy’s girl; the main reason I picked up a guitar was to be like him. Anyways, my father lives in Florida, so he’s never been able to attend one of my shows before. Well, he showed up to my gig while he was in town last month, and he got up on stage and played a few songs with me. It was an awesome moment to share the stage with my dad.

What is the next step for you in your music career?

My next step is to write a ton of songs and play as much as I can, make a kick ass album, and go on tour!